There are no featured classes to display!

A SEASON OF PERSPECTIVE AND SHARING

Saint Paul, Minn., April 20, 2022 – Park Square Theatre and SteppingStone Theatre for Youth announced their 2022-2023 season plans today, continuing the process of bringing the two companies together in one downtown Saint Paul home. The two organizations will retain their names for their first united season, but are planning to become a single legal entity this fall.

For Park Square’s 48th season, the cohort of five artistic associates has worked to select plays that come from many points of view, with the goal of creating theatre filled with both meaning and entertainment. “We strive to be a place where everyone is able to tell their story, and where we can hear and see each other with open hearts, particularly as we rebuild connections and communities after these years apart,” says Executive Director Mark Ferraro-Hauck. The season includes two world premieres, two regional premieres, a Tony Award winner, a Pulitzer Prize winner, and the 25th anniversary of a play that has become central to Park Square’s youth education programs. The SteppingStone performance calendar will include a winter-themed play, Shakespeare performed by young people, and a touring production for very young audiences.

A slightly smaller season than in previous years, the theatres are aiming to reset and organically rebuild after the pandemic. Each play will have a slightly shorter run, have fewer preview performances and a modified rehearsal schedule that eliminates the “10 out of 12” rehearsal days that are notoriously grueling for the artists involved.

The theatre year will open with the 2016 Tony Award winner for Best Play, THE HUMANS (Sept 14 – Oct 9, 2022), by Stephen Karam. Three generations of the Blake family have assembled for Thanksgiving and everyone is determined to make the best of it, but as they attempt to focus on the positive, old wounds, current mistakes, and future fears threaten their stability. Both blisteringly funny and deeply chilling, the play offers a stunning portrayal of the human condition; a family at its best and worst navigating the challenges of everyday life.

Next, Park Square deepens its relationship with Full Circle Theater Company with a co-production of FIRE IN THE NEW WORLD (Oct 19 – Nov 6, 2022), written by Rick Shiomi, who is a co-founder of Full Circle and serves as an artistic associate for Park Square. In this world premiere noir mystery, Sam Shikaze, hard-boiled private eye, fights crime and discrimination in Vancouver’s Japantown in the years after WWII. When the beautiful Japanese American wife of an ambitious real estate developer goes missing, Sam is on the case in a savvy detective caper that mixes social commentary with plenty of sly intrigue.

For the holiday season, SteppingStone will present THE SNOWY DAY AND OTHER STORIES BY EZRA JACK KEATS (Dec 1 – 23, 2022). With a script by Jerome Hairston, and based on the books by Ezra Jack Keats, this magical tale will explore the wonder of a fresh snowfall, the delight of whistling for the first time, the awe in finding special treasures, and the joy of making new friends. A timeless classic, THE SNOWY DAY is the most checked-out volume of all time at the New York Public Library and is known for being the first book featuring an African American child to win the Caldecott Medal. This new ensemble-driven production will explore connections to water and the changing of the seasons through movement and storytelling.

Frances Goodrich and Albert Hackett’s adaptation of THE DIARY OF ANNE FRANK has become a core part of Park Square’s educational offerings over 25 years, with over 265,000 students having experienced Anne Frank’s story at the theatre. To commemorate the anniversary, the company will present an all-new production. As the Frank family hides in Nazi-occupied Amsterdam, Anne shares both her everyday teenage challenges and the terror of the Holocaust. Now more relevant than ever, this resonant story of hope and imagination in the darkest of times illuminates a part of history that must not be forgotten. On the Park Square Theatre mainstage for all audiences Jan 18 – Feb 12, 2023, with an extended run for education groups.

In February, SteppingStone will produce its first ever Shakespeare featuring a cast of actors ages 16-21. A MIDSUMMER NIGHT’S DREAM (Feb 8 – Mar 5, 2023) will bring a genuinely youthful perspective to some of the bard’s most well-known young characters. Available to both school and public audiences, this production will be a new variation on the theme of literary classics that have been at home on the Park Square stage for many years.

Collaboration continues in the spring with a co-production with PRIME Productions of THE REVOLUTIONISTS (Mar 29 – Apr 16, 2023), by Lauren Gunderson. In this riotous comedy four women find themselves caught up in the French Revolution: an assassin, a spy, a playwright, and, of course, Marie Antoinette. They plot murder, find friendship (and do some good writing), in an irreverent, poignant comedic romp that considers how we go about changing the world.

A comedy-drama exploring fatherhood, loneliness, and the complexity of justice, BETWEEN RIVERSIDE AND CRAZY (May 24 – Jun 18, 2023), by Stephen Adly Guirgis, won the 2015 Pulitzer Prize for Drama. The New York Times describes it as “a rich new play… Mr. Guirgis has a splendid ear in blurring lines between the sacred and profane and it is a dizzying and exciting place to be.” Surrounded by a beautiful and eclectic stream of family and houseguests, ex-cop and recent widower “Pops” is barely holding on to his stability and his once-grand apartment on Manhattan’s Riverside Drive. This production features a cast of well-known local artists led by James A. Williams as Pops.

SteppingStone has two titles yet to be announced for the spring and summer. In May, the theatre will devise a new work for very young audiences. The work will be hugely interactive and travel to schools, libraries, museums and other hot-spots of the under-5 set. Later, SteppingStone will bring back its annual summer musical performed by some of the Twin Cities’ most talented young performers.

The classics get a summer shake-up as Park Square presents FOOLS AND LOVERS (Jun 7 – Jul 2, 2023), adaptations of Shakespeare by Gregory Wolfe and Gregory Sherman, with original music by Andrew Sherman. MUCH ADO ABOUT NOTHING meets TONY AND TINA’S WEDDING in a beguiling mashup of the classical and comedic. With text drawn entirely from Shakespeare’s plays, some set to music, the play invites the audience into an immersive wedding experience where love can be found in all its guises – young, questioned, rejected, rediscovered – and ultimately conquering all.

Finally, Park Square concludes its season with a world premiere mystery by Jeffrey Hatcher and Steve Hendrickson. HOLMES/POIROT (Jul 19 – Aug 20, 2023) is based on “Murder on the Links” by Agatha Christie with characters created by Sir Arthur Conan Doyle, bringing not one, but two of the greatest detectives of all time to the stage in a tour-de-force of cunning plot twists and deft storytelling. Separated by 25 years, the two master sleuths examine a related case, each employing their signature methods and indelible personalities.

SEASON TICKETS are on sale now for the Park Square season. Subscriptions include seven or five show packages, as well as choose-your-own packages. Subscription prices begin at $66 and offer discounts up to $100 over single tickets. SINGLE TICKETS will be available on a rolling basis, with the fall productions becoming available July 5. SteppingStone’s THE SNOWY DAY is available for school bookings now.  Contact education@parksquaretheatre.org. General audience tickets will become available July 5.

The ticket office is open Wednesday and Thursday, noon-5pm, at 651.291.7005, or at tickets@parksquaretheatre.org. 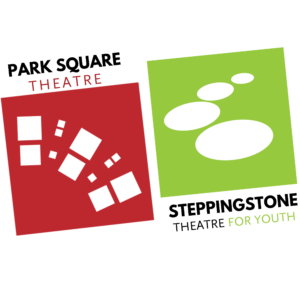 At SteppingStone, we are committed to access and inclusion for all people. We stand firmly in opposition to racism, and our programs challenge our young artists, staff, and Board of Directors to foster inclusion and seek equity for all, including Black people, Indigenous peoples, people of color, LGBTQIA+ people, people of all economic backgrounds, people of all religions, and people with disabilities. SteppingStone collaborates with families to meet students’ needs, whether they are social, academic, developmental, or physical.

Young people are artists, makers, and doers. They need to belong and to contribute to their world. When young people make art together, they change themselves and the world around them for the better.

SteppingStone ignites belonging, generosity, mastery, self-advocacy, and inspiration by creating art with young people to share with the world.
Give Today!